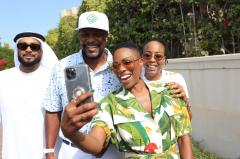 The build-up to the AFROZONS DUBAI SOUND OFF, holding in March of next year is gaining momentum; as Dubai’s Department for Economy and Tourism, DET formerly known as Dubai Tourism, unveils, International Afrobeat superstar, D’banj, popularly known as the Koko Master, as the Official Afrobeat Artiste of the AfroZonsDubai Soundoff.

D’banj who has received numerous international awards like the Best International Act (Africa) at the 2011 BET Awards and Best-Selling African Artiste at the 2014 World Music Awards has been an Icon for Afrobeat music for over a decade. 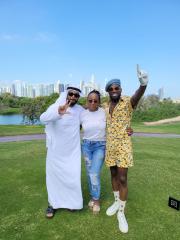 The Koko Master, who has been quiet for some time, just released a new album. The new album, named “Stress Free (Chapter 1)” melodically fits into the theme of the Dubai Soundoff; which is basically an avenue for Afrobeat lovers around the world to have a stress-free time while experiencing the greatness of Dubai.

The official website for the Soundoff is www.afrozonsdxb.com. The website hosts further information on the ways to join D’Banj, Radio Hosts and Celebrities at the Dubai Soundoff. It gives you information on the discounted travel packages and how to stand a chance to win a trip giveaway. The winners will receive flight tickets for two, hotel accommodation, feeding, special tours, airport transfers, and visa’s (where necessary), to attend the AfroZons Dubai Soundoff in March 2022. 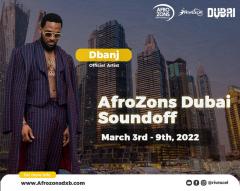 “The Afrozons Dubai Soundoff has received incredible feedback across all markets since its launch. We are very proud of what has been accomplished until this day and the partnership between DET, Dubai’s Department of Economy and Tourism and our partner Afrozons has proven to be very successful. Therefore, we are excited to announce another milestone in the Soundoff, which is having D’Banj join us as the lead musician for this incredible project. We are convinced that his energy and positive attitude are a great fit for our brand and that he will take this project to the next level. Finally, we are thankful to having D’Banj aboard for this journey and we are certain that we can create an outstanding and memorable event together in Dubai early 2022”, said Issam Kazim, Chief Executive Officer of Dubai’s Department of Economy and Tourism (DET), host of the AfroZons Dubai Soundoff

“I have always said content is the new Crude Oil and it takes people to create content. This is why I love what the Dubai’s Department of Economy and Tourism (DET) and AfroZons are doing here. After the global Covid 19 pandemic people and economies are trying to bounce back, stress free. The AfroZons Dubai Soundoff drives that purpose by bringing people together in a stress free environment. I am excited to be part of this project and look forward to the many ways we can make the Dubai Soundoff a massive success”, D’Banj said.

Dubai’s Department of Economy and Tourism (DET), formally known as Dubai’s Department of Tourism and Commerce Marketing (DTCM) is the principal authority for the planning, supervision, development, and marketing of Dubai’s tourism sector. It markets and promotes the Emirate’s commerce sector and is responsible for the licensing and classification of all tourism services, including hotels, tour operators and travel agents. Brands and departments within the Dubai Tourism portfolio include Dubai Business Events, Dubai Calendar, and Dubai Festivals and Retail Establishment.

About D’Banj: Oladapo Daniel Oyebanjo, better known by his stage name, D’banj, is a Nigerian singer, rapper, businessman and the founder of DB Records. He has won several music awards, including the awards for Best African Act at the MTV Europe Music Awards 2007, Artist of the Year at the MTV Africa Music Awards 2009, Best International Act: Africa at the 2011 BET Awards, and Best-selling African Artiste at the 2014 World Music Awards, Evolution award at the 2015 MTV Africa Music awards. 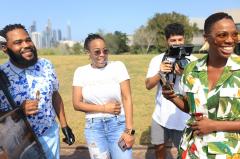 Mr. Oyebanjo adopted the stage name D’banj, a combination of his first name, Dapo, and his surname, Oyebanjo. D’banj is best known internationally for his 2012 summer hit “Oliver Twist”, an up-tempo dance fusion of Afrobeats and electronic dance music that topped the African charts in 2011 and was a top 10 hit in the UK singles chart in 2012 reaching No. 2 on the UK R&B chart.

D’banj is also the founder of Koko Foundation for Youth and Peace Development. He was Nigeria’s first United Nations Youth Ambassador for Peace, recognition he got for using his high celebrity status to attract attention to serious and critical issues in Africa.

Atorise Sets To Kick Off Global Tour From Dubai With Entire Band.