The Commandant, Osun State Command of the Nigeria Security and Civil Defence Corps, NSCDC, Commandant Agboola Sunday has paid a working visit to the Ataoja of Osogbo, Oba Jimoh Olanipekun Oyetunji as part of his efforts to assure citizens of the corps readiness to tackle all forms of insecurity in the State. 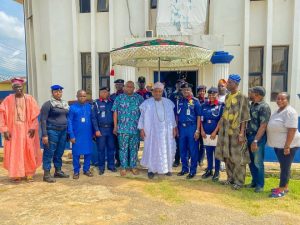 In a press statement e-signed and released to the National Association of Online Security News Publishers, NAOSNP by the State Command’s Spokesperson, ASC II Atanda Olabisi stated that, “Osun State Commandant of the Nigeria Security and Civil Defence Corps Agboola Sunday visits the ATAOJA OF OSOGBO, Oba Jimoh Olanipekun Oyetunji, assures his readiness to tackle all forms of fear of insecurity in the State and gave his assurance of it’s primary constitutional responsibility of Protection of all Critical Assets, Lives and Property of People of Osun State.” 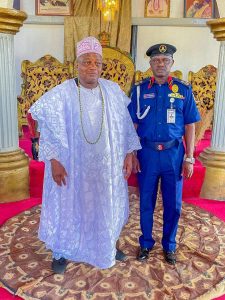 According to the statement, “Commandant Agboola Sunday also advised the citizens to be security conscious, vigilant, co-operate and collaborate with the NSCDC by giving useful and timely information.”