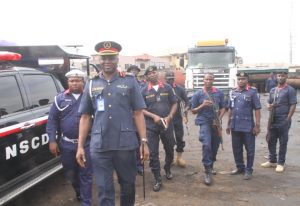 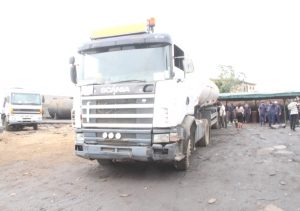 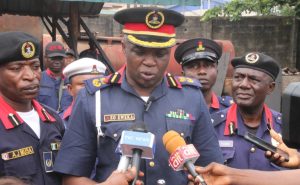 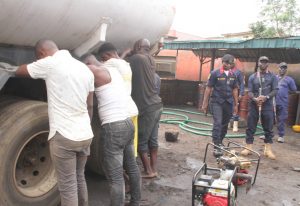 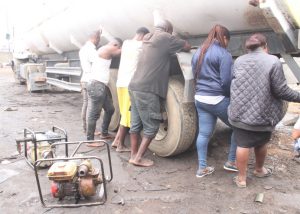 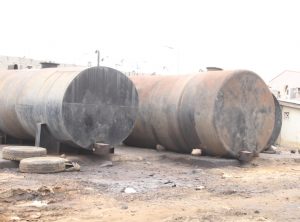 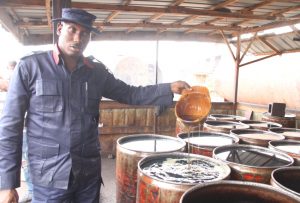 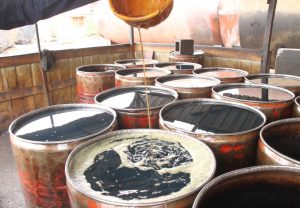 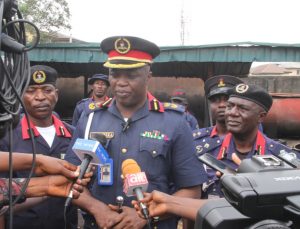 If oil thieves and vandals will desire to continue their nefarious activities, the National Security and Civil Defence Corps (NSCDC) will not relent in ensuring that they are arrested and face the full wroth of the law. This is so that its mandate to protect critical national infrastructure is fully realized.

In line with this patriotic duty, the National Security and Civil Defence Corps (NSCDC) in Lagos under the leadership of Commandant Eweka Douglas Okoro foiled the activities of vandals who have made the stealing of petroleum products their lifestyle. They were discovered within an highbrow estate in the Oregun/Olusosun axis of Lagos today. After about 4 days of monitoring the illegal activities, the NSCDC Lagos Command officers swooped in on the criminal den and arrested six.

Speaking to National Association of Online Security News Publishers, NAOSNP at the successful counter-vandalism exercise, the Lagos Commandant of National Security and Civil Defence Corps (NSCDC), Commandant Eweka Douglas Okoro said: ‘We are here today to parade some of the unscrupulous elements in the society. Our amiable CG’s new vigour towards eradicating oil theft as well as reducing criminality to the barest minimum in person of Dr. Ahmed Abubakar Audi phd, mni has directed that all the 36 states in the federation should improve on carrying out antivandal activities.

Based on this, our anti-vandal men through their intelligence network got to know about this location where lot of vandalism and illegal oil dump is. This oil dump we discovered is where they adulterate which causes a lot of damage to vehicles and trucks in the society.’

‘The idea of doing this shady activity in a gated environment is to use it as a shield for us not to discover where they are. This is supposed to be an estate where responsible people are living.

Despite the gate, this is a sabotage. It is not good for health. It is illegitimate business. We discovered 6 surface tanks containing about 30,000 litres each and also a long truck of 45,000 litres of diesel which has been loaded. In total, we are talking about 230,000 litres of petroleum product stolen from the Niger Delta and now brought here to be adulterated. We have gotten about 4 of the peddlers’, NAOSNP gathered.

On how they perfected the exercise, Commandant Okoro said: ‘For 4 days, we have been on surveillance and yesterday evening, we were able to bust into this arena to arrest 6 people – 4 males, 2 females – as part of the people doing this job.

We are still investigating them to close in on all the syndicate involved in this act. I use this medium to implore Nigerians to go for legitimate job and not what will cause sabotage to the economy. We are ready to defend our mandate and cripple their economy so that the system of the country can improve.’