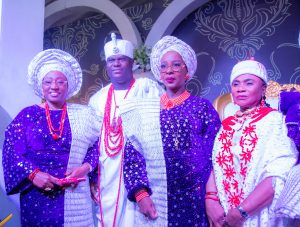 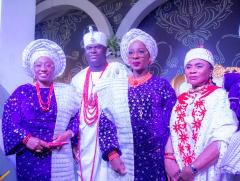 Many years ago, juju maestro, Chief Sunday Adeniyi Adegeye,  popularly known as King Sunny Ade thrilled Nigerians with a particular track that is more relevant today than it was when aired – Bibiire Kose Fowora. The song was to honour Erelu Abiola Dosunmu, the Erelu Kuti IV of Lagos. The track, “Biibire Kose Fowora” loosely translates as “A noble birth is not something to be bought”.

There is no doubt that Erelu Kuti IV of Lagos, Her Royal Highness, Dr Abiola Dosunmu, a highly distinguished woman, has used the privilege of her birth to impact her community, the yoruba race and the world at large.

It is thus not surprising that the revered monarch, the Ooni of Ife, Oba Adeyeye Ogunwusi Ojaja II recently crowned her Yeye Oodua of the source; Queen Mother of the House of Oduduwa. This is a testament to her contributions promoting commerce, art, science, sport, culture, education, research, charity, poverty alleviation and other societal causes too numerous to mention.

In an elaborate ceremony that took place on Friday, July 22, 2022, at the palace of the Ooni in Ile Ife, Osun State in the presence of dignitaries from all walks of life, Erelu Dosunmu was formally decorated with her new title. This was followed by traditional prayers and a cultural festival at the Erelu Abiola Foundation on Lagos Island.Subsequently a thanksgiving mass was held at Our Lady of Perpetual Help Church, Victoria Island, Lagos followed by the grand reception at Harbour Point, Victoria Island, Lagos.

In his remarks, Ooni noted that Erelu is a woman who has done a lot to propagate the Yoruba culture and unify the tribe. It should be noted that by her title, Erelu Dosunmu, is the mother of kings (Oba of Lagos), both past and present. Born a princess, she went on to become the queen mother and queen regent of Lagos. Beyond being a mere title, her position is recognised by the government in the same first-class category of monarchs according to the laws of Lagos State.

According to the history books, the first Erelu Kuti started the dynasty the men are currently enjoying. She was a queen but gave her crown to her son, and the direct descendants have been reigning for 400 years. A goal-getter from an early age, Erelu Dosunmu is also an advocate for gender parity, women’s development, women empowerment, and leadership.

Considering her endowments, many would have expected her to be involved in partisan politics, but she stated that her title bars her from doing that. She said, “I am the Erelu Kuti of Lagos and the title is recognised by the chieftaincy laws of Lagos State. It bars me from active politics. At the time I took up the title, there weren’t many Nigerians, outside the traditional rulers, who were involved in traditional institutions.

“I saw it as an important platform to make a difference, especially because I had lived a greater part of my life abroad and I had come to appreciate my identity, in terms of my culture and tradition.

When I became the Erelu, I worked hand-in-hand with the king and we were visible, making interventions in government affairs. If the king could not be somewhere, I would represent him. It was a beautiful collaboration between the government and traditional institutions.”

Speaking on the significance of the Erelu title, she said, “Being Erelu is not just about being beautiful, for the last 20 years of the late King of Lagos, Oba Adeyinka Oyekan II, I was one of his closest confidantes. It is a three-in-one title― Erelu Kuti, Erelu of Lagos, and Erelu Oba. The Erelu’s duties include advising the king on social matters, advising him on people deserving of titles, making sure things run well at the palace, and all those are in the gazette of the chieftaincy laws of the state.”

It should be recalled that Erelu Kuti was a member of the first Earth Summit held in Rio de Janeiro, Brazil, from June 3 to 14, 1992. She was also a part of the negotiations for foreign debt cancellation for Nigeria during President Olusegun Obasanjo’s administration and Chairman of the Lagos State Tree Planting and Beautification Committee. Other worthy  of note affiliations include the Institute of International affairs as well as representing Nigeria at environmental summits.

It is also to her credit that she revolutionised the traditional Aso Oke sector to become the multi-million dollar industry it is today. Many years ago, she established a shop on Bond Street, London, United Kingdom to promote aso oke. The renowned fashion designer, Adebayo Jones, worked with her as an intern then. So good was she in showcasing aso oke that even people from the Middle East were excited about the traditional fabrics.

A woman of many parts, she also has a title from the Royal Kingdom of Belgium. Speaking on how the title came about, she once said, “When Lagos State was the capital of the country, the diplomatic community was usually welcomed by the palace of the Oba of Lagos. It was my portfolio to receive ambassadors, entertain them, show them around, and provide whatever they needed in terms of enlightenment. Those activities got me involved with the diplomatic community.”

Over the years, Erelu Dosunmu has interacted with presidents and high-ranking officials from different countries. For those who haven’t followed her life religiously, little is said about her humanitarian strides. One of the many high points of ERAF was the rehabilitation of street children and school dropouts. An avowed philanthropist, she has often spoken about her passion for helping the underprivileged. It was to further this objective that she established the Erelu Abiola Foundation, which has contributed positively to the lives of many members of society.

When Erelu Dosunmu smiles, the world smiles along with her, not because everything is perfect but because in her, they see a woman who has over the years rebirthed herself into what she is today.

THE EXPERIENCE ’17, themed, JESUS: THE EXCEPTIONAL ONE – ‘The most anticipated gospel concert is back’

COLOMBIA-BOGOTA AWARDS CEREMONY FOR THE BEST ACTORS OF AFRODESCENDENT AND COLOMBIAN CULTURE.