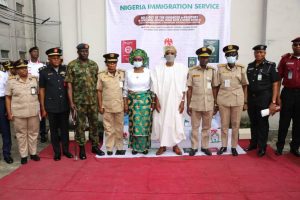 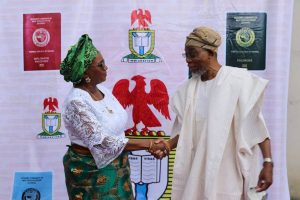 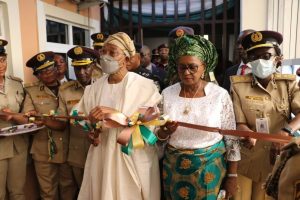 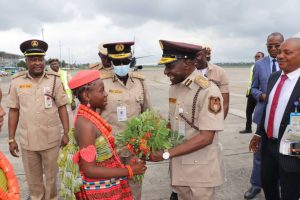 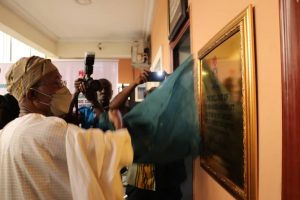 The Comptroller General of Immigration Isah Jere Idris has enjoined prospective Passport applicants to ensure that they utilize the Service’s online platform to apply and make payment for any Passport category of their choice.

The Comptroller General stated this today in Port Harcourt at the roll-out of the enhanced Passport and commissioning of the central Passport production Centre. He stated that the Service has deliberately enabled a seamless online application and payment process to discourage all forms of cash transactions which often times promote sharp practices.

In a press statement e-signed and released to the National Association of Online Security News Publishers, NAOSNP by the Service’s PRO, Assistant Comptroller of Immigration, Amos Okpu, the CG enjoined Passport applicants to embrace the online system and warned that management will deal decisively with any Personnel found involved in any cash transactions for Passport applications.

Idris noted that ‘the enhanced ePassport facility we are rolling out here today is one of such ongoing reform efforts to transform the entire Passport process and offer improved options to our citizens.

With the roll out today, all our Passport Offices in Akwa Ibom, Bayelsa, Cross River and of course Rivers States have been fully migrated to the enhanced ePassport platform’.

NAOSNP can report that with the roll-out and commissioning of the production Centre, Passport applicants who intend to process their applications in any of these States are expected to complete their forms online (via passport.immigration.gov.ng), make payment and book appointment for biometric enrolment and only visit the Passport Office they have indicated for enrolment on their appointment date.

Earlier, the Minister of Interior Ogbeni Rauf Aregbesola stated that Passport service is a very critical one that should be handled with utmost care. ‘Passport is one of the most critical nationality documents an eligible citizen should hold. It does not just allow the holder to cross national frontiers; it also confers nationality and citizenship’ rights to any holder.

The import of this therefore, is that the processes and procedures that would enable anyone to procure a Passport should not just be transparent, credible and seamless but a product of utmost diligence by those charged with the responsibility’, he stressed.

The Minister commended the NIS for the series of reform efforts it has brought to fore on the Passport platform stressing that the journey from the manually-written Passport to the machine readable, to the electronic and now to the enhanced electronic Passport has been most interesting.

He noted that the fact that the NIS has continued to ensure that the Nigerian Passport satisfies all the standards set out by the International Civil Aviation Organization (ICAO) is not only laudable but a huge achievement.

He stated further that the enhanced ePassport is a product of the latest technology in Passport administration and issuance. The document is of higher grade with additional 25 security features than the current one. It is polycarbonate in design and therefore water-resistant. It is difficult to forge and cannot be compromised by any antics of counterfeiters and identity-fraudulent individuals, he maintained.

He re-emphasized his Ministry’s zero tolerance to any form of sharp practices capable of undermining the ongoing reforms and warned that any Personnel caught in such unprofessional acts will be seriously sanctioned. He further called on prospective applicants to utilize the online platform and ensure that they provide correct personal information in their application forms for effective processing and issuance.

Meanwhile, the Governor of Rivers State His Excellency, Chief Barr. Nyesom Ezenwo Wike CON who was represented by the deputy Governor Dr Mrs Ipalibo Banigo lauded the Service foe considering Port Harcourt as the production Centre for all the Passport Offices in the South-South.

She assured of the State’s readiness to continue to support all relevant agencies in the State and called for the sustenance of the ongoing reform efforts in Passport administration and issuance to give it enduring human face and experience.

The major highlight of the event was the cutting of the tape for the commissioning of the Passport Production Centre for Passport Offices in Akwa Ibom, Bayelsa, Cross River and indeed Rivers State by the Minister of Interior Ogbeni Rauf Aregbesola assisted by the Deputy Governor of Rivers State. With the roll-out and commissioning of the Centre, the region has joined the South East, South West and locations in the United States and UK that have been fully migrated to the enhanced ePassport regime.

The event was attended by top government functionaries of the State, Federal agencies including representatives of the military, security and response agencies in the State.