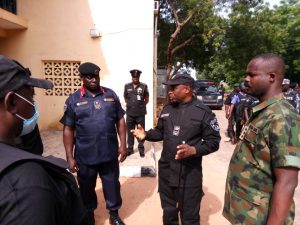 The Commissioner of Police, Kebbi State command, CP Ahmed Magaji Kontagora has ordered the tactical team in the state to go after, flush out bandits and other criminal elements, who might want to cause security threat.

In a press statement e-signed and released to the National Association of Online Security News Publishers, NAOSNP by the Command’s Spokesperson, SP Nafiu Abubakar stated that, “In fulfilment of the promise made to the victims and residents of Zagi village in Augie Local Government Area of Kebbi State during an on the spot assessment visit on Friday, 19th August, 2022, the Commissioner of Police, Kebbi State Police Command, CP Ahmed Magaji Kontagora and heads of other Security agencies had briefed the additional Police Special Teams, Nigerian Army, DSS and NSCDC personnel at the Police Headquarters, Birnin Kebbi, before their deployment to reenforce the earlier Police Tactical Teams stationed at the area.”

According to the statement, “The CP also directed the personnel to decisively deal with the bandits and other unscrupulous elements, who might want to cause security threat in the area.”

Meanwhile, CP Kontagora further warns the special tactical teams to be civil, polite, and respect the human rights of the people they are going to serve.