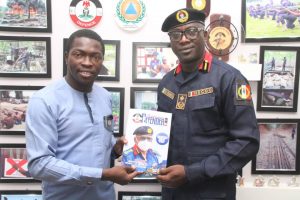 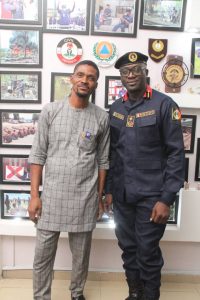 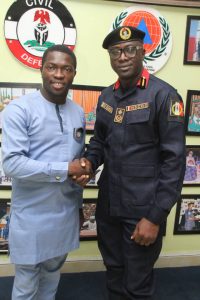 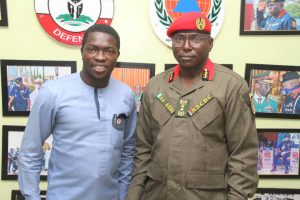 The Commandant-General of the Nigeria Security and Civil Defence Corps (NSCDC), Dr. Abubakar Ahmed Audi has over the week received the President of National Association of Online Security News Publishers (NAOSNP) in a courtesy visit.

During the meeting which took place in his office at the corps’ national headquarters, Abuja, CG Audi acknowledged the importance of the media in prompt and precise reporting of the activities of the security agency which he leads.

Noting that the NSCDC will continue to discharge its statutory responsibility as ‘the lead agency in the protection of critical national assets and infrastructure’, CG Audi affirmed that the organization is never in competition with other security agencies but rather to work in collaboration. He also added that youths form the core of its staff strength. 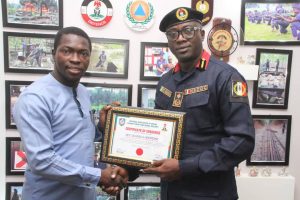 The agency which regulates, monitor, supervise and license private guards companies in Nigeria have under the leadership of CG Audi made huge successes in staff welfare, licensing private security companies, security personnel training, among others. It is also noteworthy that the agency is a grassroots organization with offices in all 774 LGAs in Nigeria. 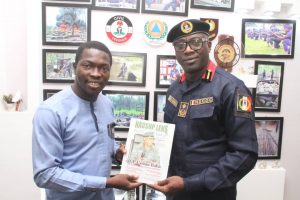 Speaking during the visit, the President of NAOSNP, Samson Oki praised the innovative and transformational leadership which CG Audi brought into the office less than two years. He also presented a NAOSNP certificate of credence to the Commandant-General.

In the same vein, the Director of Public Affairs, NSCDC, DCC Olusola Odumosu was also at the courtesy visit. He was also presented a certificate of credence for his amazing media relationship by the President of NAOSNP, Samson Oki. This relationship has been able to position the corps adequately before Nigerians, NAOSNP can report.