The oil product, probably ferried from Niger Delta, was conveyed in four (4) trucks last Friday when the officers of NSCDC Lagos Command arrested them. 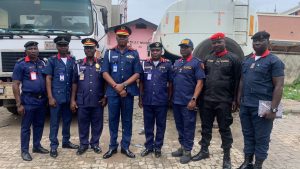 Speaking at the parade of the suspect, the NSCDC Lagos State Commandant, Commandant Eweka .E. Okoro said: ‘We are parading some suspects and trucks that were arrested Friday night. This people were arrested with adulterated AGO using the Lekki axis rather than the normal Berger axis to sneak away from the eagle eye of security officers. On Friday, my officers intercepted 4 trucks with 5 suspects and they all on interim pleaded guilty. We have taken the product for testing and analysis. They are all adulterated AGO probably ferried from the Niger Delta.’ 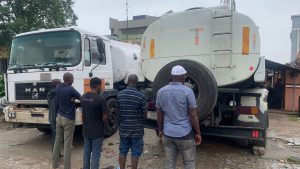 ‘This particular one is so disheartening because they thought they are smart by passing through an unauthorized route. But our men are equally watching. We are parading them as a way to prevent others from doing such dastardly act. After parading, we will take them to court where justice will take its course. This is to ask others to desist from sabotaging the country. The country is bleeding, the government is losing revenue, and this is inimical to the country’s progress. As NSCDC saddled with the responsibility of protecting critical national assets, we will not open our eyes and allow unscrupulous people put the country to disrepute and shame’, Eweka told Trek Africa Newspaper.

‘Our Commandant General, Dr. Abubakar Ahmed Audi has reiterated in more than 3 occasions that the issue of oil theft is a threat to the economy and as a result, he put all state commandants on their toes to do everything within our power to make arrests. This has spurred and energized us to do what is expected of us. We will not let him down. We will not let the nation down.’ 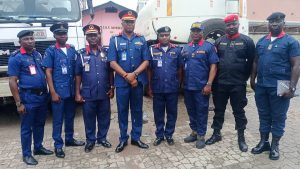 ‘We have made this arrest. We will arrest as many people that are involved in this act. This is more like a chain, we have arrested two of the accomplices and they are undergoing interrogation. We are telling others that they should desist from this dastardly act which is making government lose revenue. As NSCDC in Lagos, we will not condone this activity’, Eweka concluded.