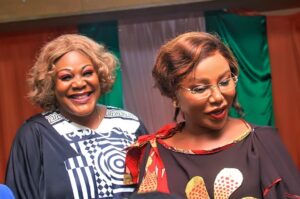 On Tuesday, December 20, 2022, the Ministry of Women, Family and Children organized the official launch of the communication and awareness campaign on gender legal texts at the Plateau , hôtel de ville in Abidjan. This ceremony was chaired by the Minister for Women, Family and Children, Mrs. Nasseneba TOURÉ, in collaboration with the Embassy of Canada and the Embassy of Spain. Corine Hazoumé, Founding Director of CerAfrique and gender promoter was invited to participate in this vast campaign.

Equal opportunities, the promotion of gender, the fight against gender-based violence, women’s values, women’s rights, the evolution of gender…were addressed by the speakers. Minister Nasseneba TOURÉ who notes “a lot has been done for the rights of African women” urged women to “take power.” It has encouraged a great mobilization around gender for a fairer society and more inclusive development.

BA, THE MOST EXPENSIVE AFRICAN PORCELAIN IN THE WORLD.