As newly registered voters begin the collection of their permanent voters’ cards, PVCs as part of the build-up toward the 2023 election, the Kwara State Chapter of the Social Democratic Party (SDP) has kicked against the subtle manipulation of the Kwara State Social Investment Programmes (KWASSIP) and attempt to turn it into a Vote Buying Machine, (VBM). 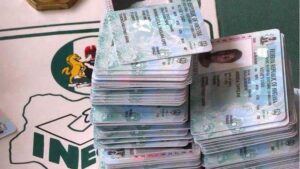 In a release on Thursday signed by Mallam Olawale Abideen, a Deputy Director in the Party’s Directorate of Media and Strategic Communication, the SDP explained that the feelers coming to the party from some communities across the state painted a depressing scenario of how agents of the State are subtly demanding for the PVC from potential voters before being enrolled for the programme.

The Kwara State Social Investment Programmes (KWASSIPs), according to the government, was established to impact positively on the lives of the poor, vulnerable, unemployed and those at the bottom of the financial pyramid without access to funding.

Since its establishment, Governor AbdulRahman AbdulRazaq has claimed that thousands of lives are being touched with the social investment programme of his administration.

The SDP however maintained that the attempt to now tie the submission of the PVC to KWASSIP enrollment is the height of political banditry aimed of robbing the people of the power to freely choose who to govern them in 2023. It added that the Programme as it is currently being hawked is nothing but a wasteful spending binge and a lazy attempt at getting people out of poverty.

The party equally challenged the State Government to release an audited report of the total spending on the programme so far, noting that the cash transactions are not only subject to abuse and diversion but also an easier method of obscuring the audit trail.

While urging the people to heed INEC call to go and collect their PVCs, it charged them to remain resolute and resist every attempt and manipulation to cajole them to surrender their cards under any guise.

The Party maintained that the call on voters becomes necessary against the background of the recent lamentation by Attahiru Garba Madami, the Resident Electoral Commissioner of the Independent National Electoral Commission (INEC), Kwara State, over the poor turnout for the collection of the Permanent voters’ cards by the registered voters in the State.

According to him, “Out of the 46,602 new PVCs received from the INEC headquarters in the state only 18,885 had been collected with a balance of 27,602 awaiting collection.

The SDP therefore re-emphasised the charge of it’s gubernatorial candidate, Alhaji Hakeem Oladimeji Lawal to Kwarans to avail themselves of the opportunity to collect their PVCs, adding that the card remains the only license and power to kick out useless leaders in the forthcoming 2023 elections in the State.

“Democracy is about the power of the people to freely choose their leaders and representatives in a periodic election. The PVCs remain your power and weapon to hire good leaders and fire bad rulers. The 2023 election will be very decisive in Kwara. So, let us be on guard to frustrate every attempt to subvert the will of the good people of Kwara in this election,” the party said.